The Nissan Z is a popular sports car that has been a part of Nissan’s vehicle lineup since the 1960s. However, the latest model of the Nissan Z—the Nissan 370Z—was discontinued after the 2020 model year in preparation for the release of the all-new Nissan Z that is expected to be released for the 2022 model year. The Nissan Z returns and car enthusiasts can’t wait!

A proto concept for the all-new Nissan Z vehicle was revealed back in late 2020, but the new Nissan Z will make its official debut on August 17th, 2021 and is expected to become available for widespread purchase in time for the 2022 model year. Keep reading to learn more about the history of the Nissan Z, why this vehicle is so iconic, and what to expect from the all-new 2022 Nissan Z model.

History of the Nissan Z

Although many drivers have recently heard about the Nissan Z for the first time as a result of the upcoming release of the all-new Z model, the Nissan Z actually has a very long history that dates back to the 1960s. 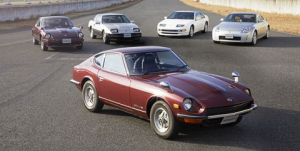 The first Nissan Z-car—the 240Z—debuted in 1969 as one of the first-ever sports car models in Nissan’s vehicle lineup. Nissan’s 240Z model sold very well through the 1970s and became known for its impressive drive performance and coveted sporty look and feel on the road. Nissan 240Z models won multiple professional racing championships and were even used as police vehicles in Tokyo during this time.

After the 1996 model year, the Nissan 300ZX was discontinued due to declining sales that were primarily a result of a shifting focus in the auto industry away from sports cars and toward more practical vehicles like SUVs. Nissan Z-cars were not sold in the United States between 1997 and 2002, but the Nissan Z was revived for the 2003 model year as the Nissan 350Z. Throughout the early 2000s, the Nissan Z made great leaps in drive performance and once again became a very popular model on the mainstream auto market.

By 2013, however, the Nissan 370Z—which debuted as the sixth-generation Nissan Z in 2009—was becoming less popular on the mainstream auto market. In 2019, Nissan only sold just over 3,300 Nissan 370Z models—which explains why Nissan made the decision to discontinue the 370Z model for the 2021 model year.

For the 2022 model year, however, an all-new Nissan Z will hit the mainstream auto market. Keep reading to learn more about this revival of the Nissan Z-car.

What to Expect from the New Nissan Z

After a year off the market, the Nissan Z is ready to return to the mainstream auto market in full force with updated and upgraded features that are expected to help this luxurious, high-performing sports car make an impressive comeback in the auto industry.

Few official specs for the new Z have been revealed, but this all-new sports car is expected to come equipped with rear-wheel drive and a twin-turbocharged 3.0-L engine that delivers approximately 400 horsepower on the road and pairs with either a standard manual or optional automatic transmission. In addition to its impressive powertrain, the 2022 Nissan Z model will likely feature Nissan’s fully digital instrument cluster and 8.0-inch touchscreen infotainment display inside as well as more luxurious interior features such as optional leather seat surfaces.

When Will the Nissan Z Be Available?

Although the Nissan Z sports car is set to debut on August 17th, the 2022 Z is not expected to actually hit the mainstream auto market and become widely available for drivers to purchase from auto dealerships until late 2021 or even early 2022.

If you are a driver in New York who is interested in making the 2022 Nissan Z your next vehicle, you still have a few months to wait until you can actually get your hands on this all-new sports car from Nissan. Early information suggests, however, that the 2022 Z will likely be well worth this wait, and the August 17th debut of the Nissan Z will reveal even more exciting details about the eagerly-awaited 2022 Nissan Z. If you’re excited to hear that the Nissan Z returns, check back to our blog for more info.