Skip to content
Home » My Nissan Is In Transit: What Does That Mean?
Previous Next

My Nissan Is In Transit: What Does That Mean?

If your car’s status shows that it is currently in transit, that means that it is currently in the process of being transported from a factory or dealership to the dealership where you will eventually pick it up. More often than not, a Nissan in transit is on its way to a dealership from a factory where its model line was produced, as it is less common for dealerships to get cars transported to their lot from another separate dealership. Keep reading to learn more about what it means when your Nissan is in transit.

Why Are There So Many Cars in Transit?

There are currently more cars than usual that are in transit, and the process of a car being transported from a factory or dealership to another dealership also seems to be taking longer than it usually does.

The current high number of cars that are in transit is likely due to shipping delays that are primarily a consequence of the COVID-19 pandemic. Staff shortages due to illness or exposure related to COVID-19 have made it more challenging for vehicle transport quotas to be met in a timely manner and have in many cases extended the amount of time that a car is in transit.

When Will a Car in Transit Arrive? 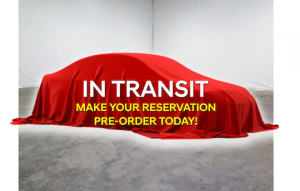 There is no exact timetable that defines when a car that is in transit will arrive at your local dealership and be available for you to pick up and take home with you. However, most cars that are in transit take at least 3 days to arrive at their destination and generally do not remain in transit for more than 30 days.

However, it is important to note that there are possible shipping delays that can occur while your car is in transit—so even cars that are in transit from a nearby factory or other dealership are not guaranteed to arrive within a matter of days. Waiting for a Nissan in transit requires a good amount of patience because the amount of time it will take for your car to arrive at the dealership facility near you is unpredictable and varies depending on the given situation.

How to Avoid Waiting for a Nissan in Transit

If you have not already ordered your next vehicle, there are a few ways you can avoid the frustration of waiting for a car that is in transit for an undetermined amount of time. The easiest way to avoid waiting for a car in transit is to order a car model that is already in stock on the lot of a dealership near you.

If the dealership that is closest to you does not have the specific car model that you want in stock, it might be worth the trip for you to travel to a dealership that is farther away from you and has the car model of your choice in stock in order to avoid waiting for a car to be shipped to you from a factory or dealership.

Of course, purchasing a car that is already in stock on a dealership’s lot significantly decreases your options for customizing your next car. If you are in the market for a heavily customized car, you might actually save time by just ordering the car you want and waiting for it while it is in transit rather than waiting for the exact car model you want to appear in stock at a dealership in your area.

Reserve your Nissan by contacting us today!