More Nissan EVs on the Way

Although Nissan designed and mass-produced an all-electric vehicle before any other major automaker in the auto industry, it took them more than a decade after the release of the coveted LEAF to debut their next all-electric car—the Nissan Ariya—which will hit the market later in 2021 in time for the 2022 model year. The Nissan Ariya is not yet available for purchase, but Nissan has already announced the upcoming release of this vehicle for the 2022 model year.

The Nissan LEAF is a hatchback EV, and the 2022 Nissan Ariya will debut on the mainstream auto market as an all-electric crossover SUV. So far, these are the only two all-electric vehicles in Nissan’s vehicle lineup. However, many drivers and critics in the auto industry alike believe that Nissan’s all-electric vehicle collection might be getting a new addition in the near future.

Is Nissan Planning to Produce a Compact All-Electric Crossover SUV?

Rumors have been swirling around the auto industry that Nissan will soon release another electric SUV—one that is smaller than the electric Nissan Ariya that will be hitting the mainstream auto market by the end of 2021.

The primary reason why these rumors have begun is that both the platform and the e-4orce all-wheel electric drive system of the 2022 Ariya are all-new for the Ariya. They have not yet been featured in any other Nissan model and these features are designed specifically for all-electric vehicles. It is doubtful that Nissan would develop an all-new vehicle platform and all-wheel-drive system for just one model. 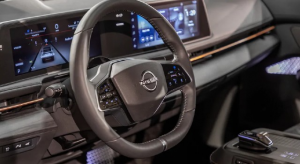 More Nissan EVs on the Way

Auto critics and drivers alike have concluded that this must mean that Nissan is planning to release more all-electric vehicles. In fact, it is only a matter of time before Nissan announces the upcoming release of a new all-electric Nissan vehicle. This major auto brand has pledged to do everything it can to reduce the carbon emissions of the vehicles they design in order to combat the disastrous consequences of climate change.

In order to significantly reduce the overall carbon emission of their vehicles, Nissan will need to add more zero-emission vehicles such as hybrid and all-electric models to their vehicle lineup.

The popular belief that Nissan’s next all-electric vehicle will be a compact crossover SUV originates from a statement of the head of product planning for Nissan in Europe. This representative recently announced that the e-4orce all-wheel-drive system that Nissan developed for the 2022 Nissan Ariya will be featured in other all-electric Nissan models. In this statement, the representative from Nissan Europe specifically mentioned the possibility of the e-4orce system being featured in a compact crossover SUV.

The current popularity of compact crossover SUVs and the fact that Nissan does not yet have a small crossover SUV in their all-electric vehicle lineup have further solidified the idea that the next all-electric model from Nissan will fit within this vehicle class.

Nissan has not made any official announcements regarding the details or possible release date of their expected smaller all-electric SUV. However, this model is expected to be a compact crossover SUV that uses a shortened version of Ariya’s platform. It is also expected to come equipped with Nissan’s exclusive dual-motor e-4orce drive system that allows for an all-wheel-drive and will also be featured in the 2022 Nissan Ariya.

While the rumors regarding the potential for an all-new, smaller electric crossover SUV model from Nissan are exciting—especially for drivers who are in the market for a compact crossover SUV to buy in the near future—it is also important to remember that Nissan itself has not yet made any official announcements regarding the details of this possible all-new electric SUV.

Everything that has been rumored about this small all-electric crossover SUV is based on speculation and—while that speculation might turn out to be correct—nothing is known for sure yet about the next vehicle that Nissan will add to its electric lineup alongside the LEAF and the Ariya.

To reserve your next electric vehicle, come see us at Metro Nissan Redlands!